You’re Not Thinking of Capitalism At All

Let’s make one thing absolutely clear. In capitalism working people exchange money for value. They pay for goods or labour and get value in return. In socialist redistribution working people have their money taken from them by state force and that money is exchanged for… nothing. They have their money taken from them and get nothing in return; the recipient who gets the money is not obliged to give any value. In socialism the wealth is taken, by force. In capitalism the wealth is freely exchanged. The graphic below is simply wrong on so many counts it is a wonder it is so popular. 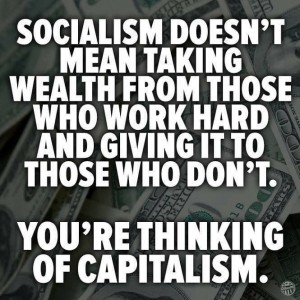 It is a wonder, that is, until you realise what is being misunderstood about policy of political parties imagined to be ‘pro-capitalism’ – this is where political sleight-of-hand confuses the concept for many people – so let me explain. There is a special kind of corporate-socialism in which the state takes tax money by force (as usual) and uses it to bail out banks, to subsidise and otherwise prop-up private enterprise or give government contracts to their mates. But this is not capitalism. Often called corporatism (or crony capitalism) this corporate-socialism also takes from the worker without returning value directly to them, and is justified by crass and false arguments about ‘trickle down economics’, just as traditional socialism calls upon ‘trickle-up economics’ as justification for theft. Both are actually statist ideals, both dampen innovation and personal responsibility, and should not be confused in any way with true free-market capitalism. Most young people living in the UK now have never experienced true free market capitalism and when they complain about capitalism are actually complaining about corporate-socialism and statism. Labour favours one, Tories favour the other, but they are both statist, they both wield state force to take from the worker without directly returning value and in the middle is the productive worker forced to pay their own bills and everyone else’s.

Since Thatcher (arguably the last classical liberal) the Tories have steadily been moving left and do not represent true free market capitalism. Labour never did.

Ezra Taft Benson, former US Secretary for Agriculture, explained it this way:

“Once government steps over this clear line between the protective or negative role into the aggressive role of redistributing the wealth through taxation and providing so-called ‘benefits’ for some of its citizens, it becomes a means for legalized plunder. It becomes a lever of unlimited power that is the sought-after prize of unscrupulous individuals and pressure groups, each seeking to control the machine to fatten his own pockets or to benefit his favorite charity, all with the other fellow’s money, of course. Each class or special interest group competes with the others to throw the lever of governmental power in its favor, or at least to immunize itself against the effects of a previous thrust. Labor gets a minimum wage. Agriculture gets a price support. Some consumers demand price controls. In the end, no one is much further ahead, and everyone suffers the burdens of a gigantic bureaucracy and a loss of personal freedom. With each group out to get its share of the spoils, such governments historically have mushroomed into total welfare states. Once the process begins, once the principle of the protective function of government gives way to the aggressive or redistributive function, then forces are set in motion that drive the nation toward totalitarianism.“No government in the history of mankind has ever created any wealth. People who work create wealth.”

That’s not to say we should not help the needy. Far from it. But it is to say that it is not the role of government to manage it. As soon as government takes on this role it abuses it, as we have seen. Taxation then becomes “…a lever of unlimited power that is the sought-after prize of unscrupulous individuals and pressure groups”, set up for ostensibly good motives, but quickly being corrupted.

And that is true for every political party in power since WWII.

Is any of this acknowledged in the popular meme above? No! That is why it is just plain wrong.

About the author Dan Liddicott

Dan Liddicott is an avid blogger having covered topics including education, technology, self-sufficiency and politics. A 'card carrying' libertarian Dan promotes small government, natural rights and the rule of law (just enough law that is).