The Price of Socialist Equality

Now that Corbyn has been chosen to head up the New Old Labour Party, it’s a good time to be reminded of why we never want them in power. 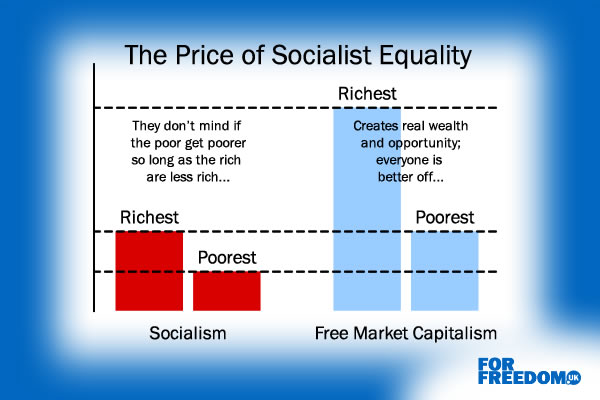 The Price of Socialist Equality

“Mr Speaker, all levels of income are better off than they were in 1979. …what the honourable member is saying is that he would rather the poor were poorer provided the rich were less rich. That’s where you will never create the wealth for better social services as we have. And what a policy! Yes, he would rather have the poor poorer, provided the rich were less rich…

“And I think that the honourable gentleman knows that I have the same contempt for his socialist policies as the people of east Europe who have experienced it… I think I must have hit the right nail on the head when I pointed out that the logic of those policies are that they’d rather have the poor poorer. Once they start to talk about the gap they’d rather the gap was that… down here… So long as the gap is smaller they’d rather have the poor poorer. You do not create wealth and opportunity that way, you do not create a property owning democracy that way.” (Margaret Thatcher, 1990)