This book is divided into two sections. The first four chapters deal with ‘straw man’ assertions that are sometimes made about free-market economics. For critics of the market economy, it is easier to respond to absurd distortions of their opponents’ position than to tackle their arguments directly. The most common exaggerations and misrepresentations about economists’ beliefs and assumptions are dealt with in Part 1.

Part 2 addresses specific claims that can be shown to be false. These claims typically portray the state of economic life in the twenty-first century in a gloomier light than can be justified by empirical evidence. Pervasive beliefs about Britons working longer and longer hours for less and less pay are addressed in this section, along with claims about inequality, social mobility and happiness.

If this book makes the reader more interested in the role of free markets in improving society, then so much the better, but that is not its main intention. Its intention is to help those interested in and who comment on economic matters to distinguish between fact and fiction in areas where facts can be clearly proven and myths debunked. 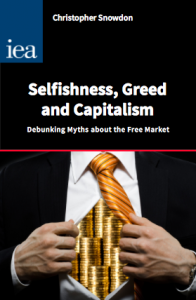